easter with a bang: the scoppio del carro

This Sunday is Easter. And if you are in, around, or even a train ride away from Florence, you will be in Piazza del Duomo come 11 AM Sunday morning. Oh, I’m sorry, you had brunch plans with the Pope? You’ll have to reschedule. The historic Scoppio del Carro (explosion of the cart) is a tradition that will quite literally blow your pastel-tinted, baby animal infused, chocolate egg Easter out of the water. 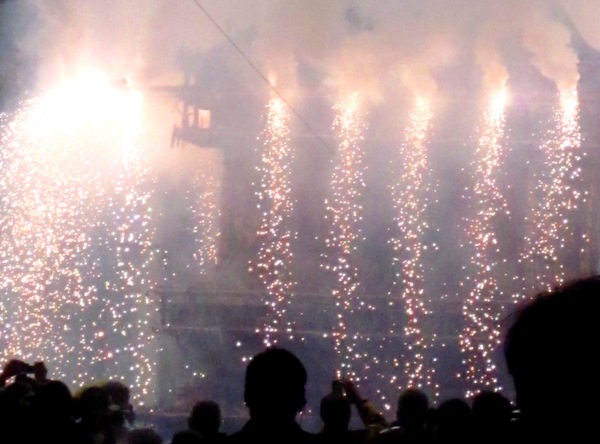 Scioppio del Carro from inside the Duomo, by Hannah

First things, first. Put on your Sunday best and head down to Piazza del Duomo around 10:15 AM. The actual explosion begins at 11:00, but you’ll want to weasel your way into a good spot.

While you’re holding your ground (use elbows if necessary) we’ll attempt to prepare you for the inevitable, “what the @#$%! was that?!” reaction with a little historical context (although we’re still not exactly sure how the explanation justifies the tradition).

To get to the bottom of this one we’ll have to rewind almost an entire millennium to the good ol’ Crusades. Florentines, eager to gain some glory, signed the dotted line and followed Florentine commander Pazzino di Ranieri de’Pazzi east. Naturally, the Florentines claimed to be the first to mount the Christian banner on the wall of Jerusalem. As a reward, Pazzi received three stones chipped from the Holy Sepulcher of Christ.

When the stones arrived in Florence, Pazzi used them to spark a fire that was then blessed and lit the candles in the Duomo. The tradition of spreading the holy flame was then applied to Holy Week (the week preceding Easter Sunday). On Good Friday, to commemorate the crucifixion of Christ,  the people symbolically extinguished all of the lamps of the city, both inside their homes and in the streets. On Easter Vigil (late Saturday night) the Archbishop would then take the holy flame around the city on a cart and with it, light the lamps, celebrating Christ’s resurrection. Actually, that’s quite a nice, lovely little tradition.

Well, after a few hundred years, Florentines grew weary of nice and lovely and in 1494 decided that some pyrotechnics could really liven things up. They hauled the cart to the space between the Baptistery and the Duomo, rigged up some fireworks, and lit up quite a show. In the early 16th century the Medici Pope, Leo X, jazzed things up even further by throwing a dove-shaped rocket into the mix (more on that later).

Like many things in Florence, not much has changed since the early 16th century about this Easter tradition. The morning starts with majestic oxen lugging the cart (which actually looks remarkably like the family temple from Mulan) through the streets of Florence accompanied by an historically costumed cortege of drummers, flag throwers, and the works. The parade pit stops at the church of Sant’ Apostoli (where the stones are housed the other 364 days of the year) and culminates between the Duomo and the Baptistery.

Easter Celebration by Roger Wo

The nave of the Duomo is blocked off and above the aisle is strung a line which connects the cart outside to a pole erected at the altar, atop which awaits Pope Leo’s dove-shaped rocket.

After lighting and blessing the flame in the Baptistery, the clergy process into the Duomo with the holy rocks and fire. Mass begins and at The Gloria, the Archbishop lights a fuse with the aforementioned flame that climbs up the pole heading straight for the dove. The dove then blazes down the center of the church with a jet stream rivaled only by RocketMan himself.

When the dove hurdles into the rigged cart outside, a fury of explosions and machine gun like noises fill the piazza. Before the cart captivates you, keep your eye on the dove. If he makes the return trip all the way to the altar a small celebratory firework will explode in the church at the top of the pole as the dove’s return indicates a good year for the crops.  Is this real life?

Redirect your attention to the spectacle  in the piazza that will last about 20 minutes. Take a moment to appreciate that this is the only moment in life ever where street level explosions and machine gun popping noises will be greeted with cheers and laughter instead of screams of terror. 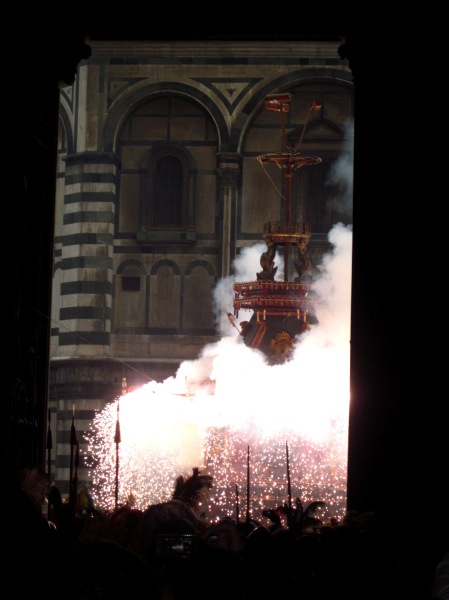 I mean, I know I’ve said it before, but can we all agree on this one  – only in Italy.

Explosion of the Cart by Monica Kelly

On Easter Monday make sure to check out the power washing of the facade of the Duomo in attempts to remove the smut from the previous day’s explosion – also a hilarious sight.

The Scoppio del Carro is absolutely, positively, without a doubt, something you will regret for the rest of your life if you don’t see. Feel enough peer pressure yet? This seemingly inane tradition will give you a glimpse of the crazy Italian psyche and forever change the way you think of Easter. Personally, this Sunday (my first Easter back in the States in awhile), as I celebrate a nice quiet day with my family, I don’t think I’ll be able to help but wonder, “so when are we going to blow something up?”