To most, Easter in Florence means one thing – a flaming dove igniting a giant cart of fireworks in the middle of a crowd at ground level. While this spectacle is certainly the main event, we don’t think you should limit your Easter festivities to Sunday morning. So we say, why not start today? And hey, who says you have to slow down after Sunday? Not these girls, and definitely not Florence. Here are six ways to celebrate Easter week (we’ll get to that flaming dove later).

Leonardo didn’t just doodle his masterpiece, The Last Supper, one day from the depths of his imagination (it probably would have been pretty weird if he had). Instead, Leo was familiar with the numerous Last Supper, or Cenacolo, scenes in Florence. The Last Supper commemorates Christ’s final meal before his death and crucifixion. Christians observe the event on the Thursday before Easter. What a perfect excuse for an art-themed crawl this week! Meg has it all mapped out here.

Street Art Stations of the Cross

Traditionally, faithful Christians observe the Friday before Easter, the day of Christ’s crucifixion, by following a walk led by scripture passages and images depicting Christ’s journey from his conviction to death. Local, and now internationally recognized, artist Clet Abraham applied a modern twist to this centuries-old spiritual journey by abstracting the scenes and installing them along the notable Viale Galileo. Exploring Clet’s stations will take you on the arduous ascent up the steps which lead from the San Niccolo neighborhood to Piazzale Michelangelo. Clet’s evocative abstractions of these classic scenes invite passersby of all backgrounds to contemplate the stations through a new lens.

Clet Abraham, Stations of the Cross, photo courtesy of facebook.com/clet.abraham

After Christ’s death comes His Resurrection, new life for all, and candy. Cafés and bakeries will garnish their windows with confectionary creations. Ornate eggs, statues of sweets, and chocolate-covered everything are sure to lure you in for a sample. If you’re more of a window shopper, we guarantee your eyes will be in for a treat. We also admire your willpower. 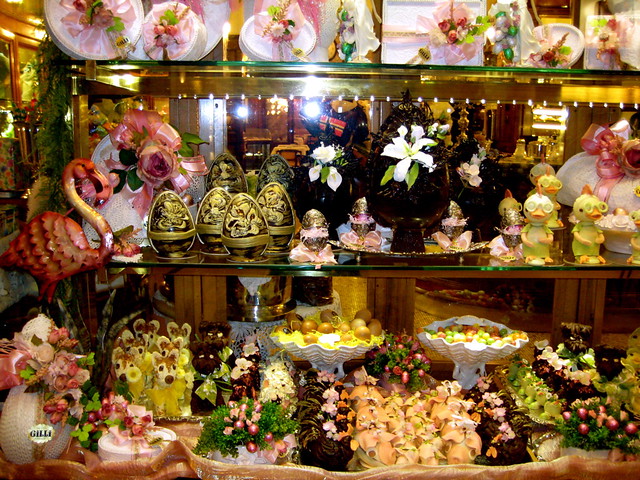 The explosion of the cart is one of Florence’s oldest (and craziest) traditions, dating back to the Middle Ages. For the full story on just how Florentines decided that lighting a wooden dove on fire, watching it soar down the center of the Duomo, and igniting a cart of fireworks in a crowd came to be, click here. To get in on the action, we recommend arriving at the Duomo around 10 a.m. Find a spot to stand, either in the Cathedral on in the piazza. High mass will begin at 10:30 a.m., and the explosion will occur about halfway through mass, around 11 a.m. 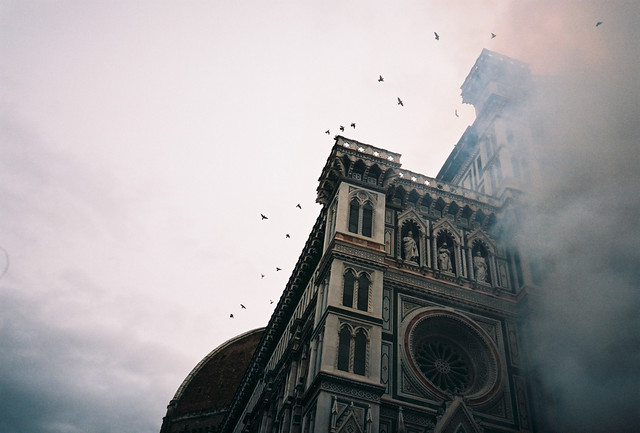 Confused Pigeons at the Scoppio del Carro by Monica Kelly

Here in America, I’ll have to shake off my sugar hangover in time for work Monday morning, making me especially jealous of the Florentines celebrating Pasquetta, or Little Easter. Florence practically requires you to take the day off of work or school, pack a picnic, find a sunny spot, and relax. Pasquetta is traditionally a celebration of spring. Families retreat to the country (or at least a good park) with a picnic of Easter leftovers, including salami, cheeses, hard-boiled eggs, and the Pasqualina (Easter cake).

Easter is not Easter until someone finds a hidden egg. So we’ll top your week off by directing you to the best “hidden” egg in all of Florence – Brunelleschi’s dome. It all starts with a contest to designate an architect to build the dome of the cathedral. Ghiberti, fresh off completion of the Baptistery doors, arrived overly confident that he would win the commission. Brunelleschi, who fled off to Rome after losing the door commission to Ghiberti, decided it was time to get back in the game and threw his hat in the ring. The competition was simple: who can stand an egg vertically on a flat marble table? While frustrated architects fumbled with their rolling eggs, Brunelleschi confidently picked his up and proceeded to swiftly smash one end onto the table, collapsing the bottom of the egg just enough so it could balance on its broken shell. Although he likely made a mess, Brunelleschi proved that he could stand an egg on one end. He then proceeded to construct the finest feat Florence would ever see.

Once you know the story, it’s hard to see the dome as anything but a big egg, standing on its head. Bravo, Brunellesci!

Art, explosions, picnics, and one really big egg. This year, take advantage of all that Easter in Florence has to offer. Even if you’re not in Italy, make like the Florentines and tell work, “Ci vediamo Tuesday!”

← a spring fling with cinque terre
the official uffizi party: the guest list →