Notte Bianca is the one night a year that Florence (museums, restaurants, shops and all) parties all night long in the name of the arts. It is winding up for its fourth installment this Wednesday, April 30th, 2014. The official schedule, outlining locations of performances, parties, and openings, is never released until just before the event. Luckily, some museums have leaked their hours, allowing us to do a little pre-planning for the party.

This year, we say go big. That’s right, after years of dancing around the obvious, we’re finally talking about the Uffizi. Wednesday night from 7 p.m. until midnight, the world-famous gallery will be opening its doors to the public to explore the treasure chest of Renaissance masterpieces by twilight and – just how we like it – free of charge. Not only that, but skipping around the Uffizi after hours makes for the perfect pre-party and warm-up to your all-nighter this Notte Bianca. 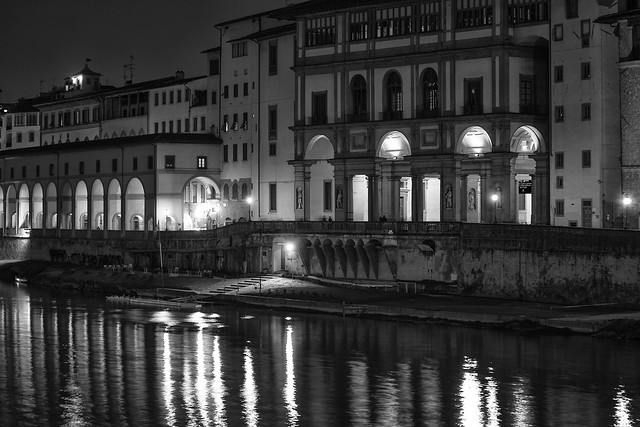 Uffizi at Night, by Alex Berger

To put it lightly, the Uffizi is overwhelming. I get it. Obviously you can’t do it all. But that’s the beauty of a free ticket and late hours. There’s no pressure. You see what you can see, and don’t feel guilty about what you miss. If you still need some convincing, we’ve gathered the guest list, so you can preview exactly who you’ll be partying with this Notte Bianca.

Don’t get lost, keep this handy TickItaly map close at hand to follow along and find the galleries where our guest make their appearances.

Map of the Uffizi, TickItaly.com

The Uffizi is crawling with ugly tots, and it’s hilarious. Why couldn’t these masters of the brush master the baby? Theories abound, but seeing as how most men were not allowed to be around infants and most artists were men, I call it a closed case. Your first ugly baby will welcome you to the party in gallery 2 in the renowned Ognisanti Madonna by Giotto.

Love affairs spawned some of the greatest works of art in the world, and they can be found right here in the Uffizi. Yeah, I know, no one wants to hang out with the star-crossed couple making out at the party, but they’re part of the package. My favorite Uffizi lovers are the Duke and Duchess of Urbino. In gallery 8, allow me to introduce you to the Double Portrait of Duke Federico da Montefeltro and His Wife Battista Sforza by Piero della Francesca. These lovers ruled and refined rugged Urbino during the Renaissance. The Duke, with his hook nose, and the Duchess with her eyebrow-less face and plucked hairline, assures us that this relationship had to be more that lust. Many theorize that the Duke commissioned the painting to honor his wife after her death. Walk to the back of the free-standing double portrait for a surprise ode to his bride. The Duke essentially lists his wife’s most admirable qualities via a lovely allegorical scene.

One of my favorite parts about the Uffizi are the countless “That was my mom’s Christmas card once!” moments I have. My favorite of my Christmas cards is Filippo Lippi’s Madonna and Child, found just beyond the Double Portrait in gallery 8. Rumor has it, Brother Filippo fell in love (or lust) with the stunning Sister Lucrezia Buti while she sat for him as he painted this very piece. Actually, it wasn’t a rumor at all. Brother Filippo had no shame in fathering little Filippino Lippi, Lucrezia’s baby, nine months later. Look to your right for the works of Filippino who followed in his father’s footsteps. Essentially, about half of the art in this room is the result of one steamy  modeling session. (I imagine my mom didn’t know that story when she bought the Christmas cards.)

The party really gets going with the Botticelli girls in galleries 10 -14. Sassy gingers strike all sorts of poses in the Botticelli masterpieces dazzling these walls – The Birth of Venus, Primavera, The Calumny of Apelles, etc. The Botticelli girls are actually just one girl – Simonetta Vespucci. When the Genovese beauty moved to Florence with her husband, she charmed the pants right off of pretty much every Florentine nobleman – including Sandro Botticelli. Neo-Platonic Botticelli believed that the contemplation of physical beauty could elevate one to a spiritual, heavenly state of mind and bring one closer to God. Simonetta was a hottie, and, therefore, Botticelli’s perfect, Neo-Platonic muse.

Sandro Botticelli, The Birth of Venus, 1485

Gallery 18, aka “the Tribune,” is where we find the Ducal Medici family reunion. They’ve invited everyone from the Medici family midget to Cosimo’s illegitimate eldest daughter and first love, Bia. This clique definitely knows how to party. The artist of these portraits is my soulmate from another century, Agnolo Bronzino. We recommend sticking with the Medici for a while and finally putting some faces to the names.

If history has taught us anything, it’s that no civilization will ever be able to party as hard as the Romans. Luckily, the Uffizi invited plenty to this party. Hanging in the halls of the Uffizi you’ll find Emperors, the Real Housewives of Rome, and some scantily clad ancient bitties. The staggering collection of Medici antiques can actually teach us quite a bit about the Romans, who practiced a visceral realism in their art second to none. No Instagram filters applied here! The Romans let it all hang out, good or bad. On a night as carefree as tonight, I think that’s something we can appreciate. 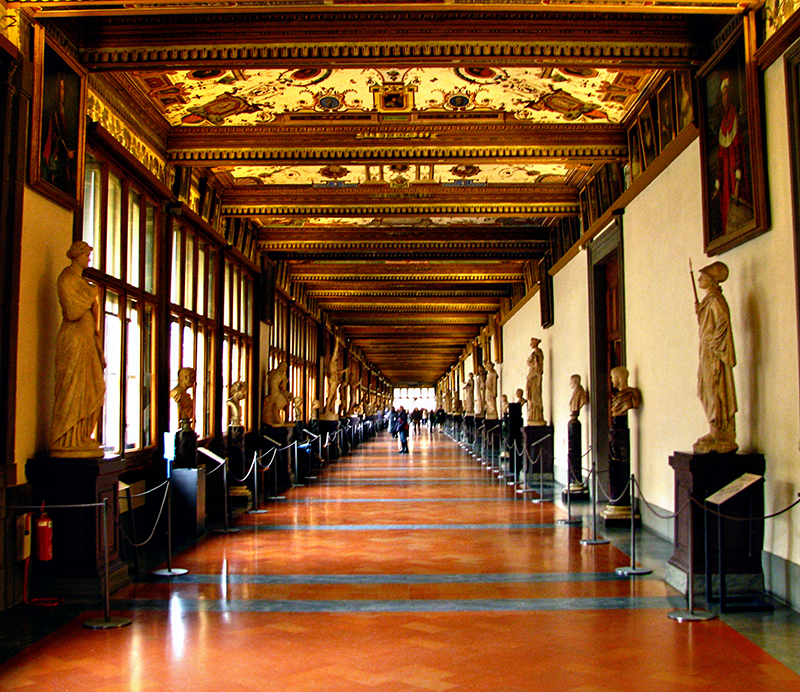 Michelangelo, Leonardo and Raphael decided to ditch Splinter and a pizza this Notte Bianca and will instead be found taking part in the pre-party at the Uffizi. Donatello, the outsider that he is, has committed to an appearance at the Bargello up the road. We recommend gallery 9 to see a few Leonardos. Gallery 25 houses Michelangelo’s most confusing work of art, The Doni Tondo.  Just one door past, gallery 26, lies a room riddled with Raphaels, including The Madonna and the Goldfinch. Kowabunga!

Just when you thought this party couldn’t get any crazier, girls just started taking their clothes off. You’ll find Titian’s Venus of Urbino lounging in gallery 28 with her entourage of scantily clad and straight-up naked women. This work was given to a young Venetian bride by her groom to be hung in their bedroom. I can’t imagine she was thrilled, but I’m sure he loved it.

So you’ve been partying for a bit, and by the time you reach gallery 29, things start looking a little funny. Proportions don’t make sense, anatomy isn’t following any sort of rules, and content is getting just plain weird. Don’t worry, it’s not you, it’s them. You’re now hanging out with the hipsters, the rebels – the Mannerists. The Mannerists decided that mainstream Renaissance art was too structured. The movement pushed golden ratios out the window and made fishy fingers, elongated necks, and trippy scenes all the rage. After all the classics you’ve been inundated with tonight, we say rage away!

Congrats, you’re about to party with some of the world’s most famous and influential works of art – who does that!?!? You do! Before you hit the streets Wednesday night, we have two more stops for you before you go.

At the end of the west corridor  you’ll find the Uffizi Caffè. Step outside and treat yourself to a “Let’s do this” view of Piazza della Signoria pulsing with party-goers below. It also wouldn’t be a bad idea to indulge in a quick espresso. You’ve got about 9 more hours ahead of you. 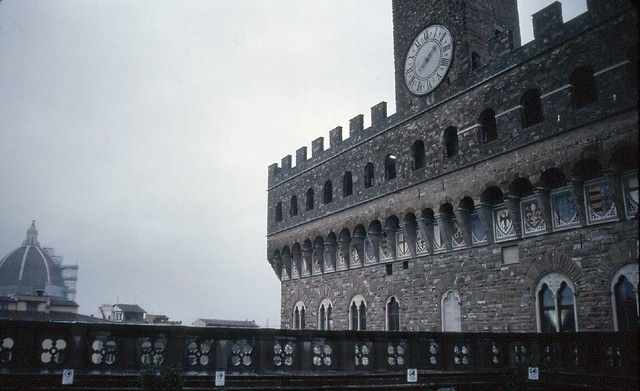 Not only does the Uffizi have some of the best bathrooms in the city, but you will be hard-pressed to find a free WC after you leave. It would behoove you to take advantage of a final pee for free. 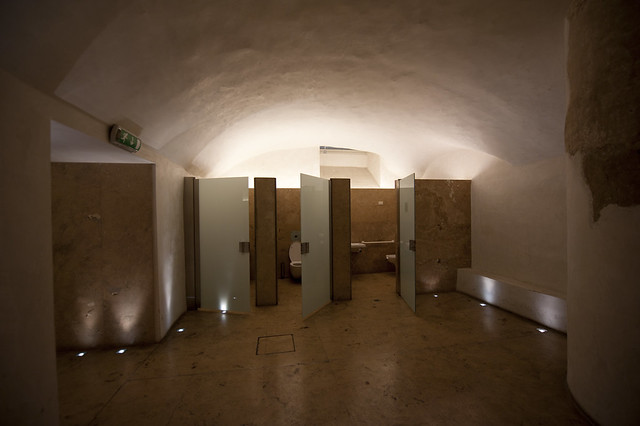 Bathrooms in the Uffizi, by Jason Pier in DC

Although Notte Bianca is the perfect opportunity to tackle the Uffizi, the party rages on year round, and lucky for you, this is one guest list that never changes. If you can’t make it to Florence for Notte Bianca, indulge in a white night of your own by visiting the Uffizi remotely via the Google Art Project and stroll the galleries from the comfort of your living room. That’s where you’ll find us!

And that, my friends, is how the Uffizi is done.