kimye’s wedding: finding history and culture in the hot mess

“Kim is even more beautiful than I am talented,” gushed the always humble Kanye West in one of his three, 20-minute speeches throughout the course of the Kimye wedding weekend. With five first dances, a massive gold box housing the bathrooms, one Jayden Smith running around in a white batman costume, and Kanye’s wedding present to Kim (a nearly nude portrait entitled “Perfect B****”), this wedding was about everything but its beautiful backdrop and our beloved city, Florence. Rather, it was a Kimye ode to self that somehow managed to surpass our wildest, wonkiest, dreams.

While the world fixates on Givenchy gowns and Kanye’s 45-minute toast to himself, we’ve decided to give some much-needed attention to the parts of the wedding that could have actually provided quite the historical and cultural experience, if guests were not in the midst of the most bizarre pop culture event of all time.

Join us, then, as we break down the history and culture that Kimye successfully walked all over. Best of all, we’ll knock about $10 million off the ticket price.

P.S. Don’t worry, we’ll get to Jayden and that batman costume, too. 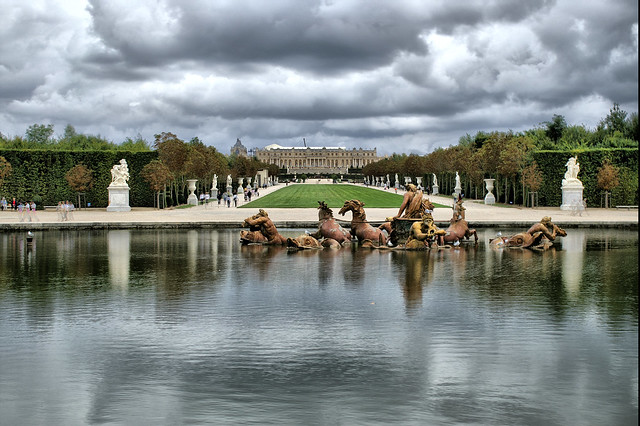 The Wedding weekend kicked off in Versailles. This means that all of the graduates who had their dream trips planned to Paris after their commencements were summarily kicked out of the palace to make way for America’s Royal Family. After an extravagant rehearsal dinner followed by fireworks, the Kardashians decided that Louis XIV’s palace was only “meh,” and loaded guests on private jets to Florence.

Why Florence, you ask? One could have argued it was for the art, the food, or the culture, until Kanye put all of our questions to rest with perhaps that biggest TMI announcement of all time – Florence is where baby North was conceived. Schifo.

When guests arrived in Florence, they were promptly swept off to the fabulous Westin Excelsior in Piazza Ognissanti, situated on the north bank of the Arno. If you’re in the mood to play Kardashian, simply head west along the Arno from the Ponte Vecchio. You will reach Piazza Ognissanti in about 7 minutes.

Before heading into the luxe palazzo, take a moment to appreciate the piazza, dominated by the church of Ognissanti. Founded in the 13th century by the Umiliati order, the church quickly became a prominent beacon of the arts in Florence. Just beyond the della Robbia inspired doors, the curious can discover Botticellis, Ghirlandaios, Giottos, and even the Last Supper most likely responsible for inspiring Leonardo. And, yes, as always, it’s free. We doubt the Kardashian’s gave a flying flip, but we’re sure you do. Check out the full tour here.

Then it’s time to pop into the Excelsior and explore the lavish lobby that greeted the celebrity wedding guests. If you’re adequately pulling off posh, you can even sneak up to the 6th floor (that’s 7th in American) to SE-STO, the terrace bar, with views with more beauty than Kanye has talent (but don’t tell him I said that!).

View from SE-STO at the Westin Excelsior 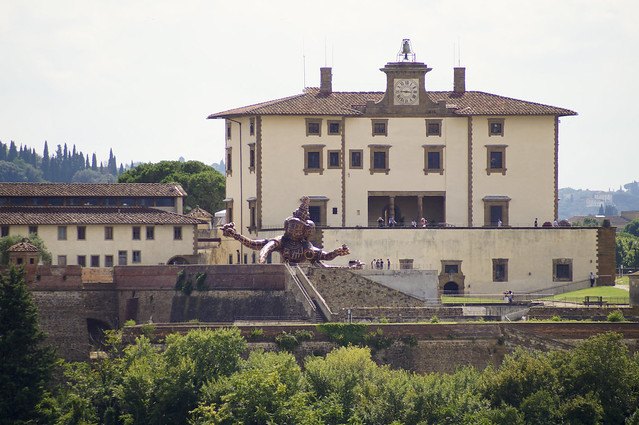 After primping and refreshing at the Excelsior, guests headed up to the Forte di Belvedere for the wedding ceremony. While guests enjoyed rides in matching private cars to conceal identities, we are, unfortunately, hoofing it. Walk back toward the Ponte Vecchio and cross over to the Oltrarno. Turn left on Via dei Bardi (first left after the bridge). In just two blocks the road forks three ways. Head under the archway and up the steepest alley, Via Costa dei Magnoli. After a walk sure to shape your very own Kardashian behind, you’ll arrive at the Forte.

Understandably, coverage of the Kimye wedding has wiped out any and all historical importance of the Forte. But for those wanting to peer past the pop culture, this spot has an interesting story to offer.

Forte di Belvedere was constructed as perhaps the least romantic spot in the city in the 16th century. Duke Ferdinando de’ Medici had his family architect, Buontalenti, construct the structure as a military fortification. The fort served to protect of the south entrance of the city. Located near Palazzo Pitti, it was also a pseudo watch tower to protect the Medici family and their home. The fort was strategically shaped like a star, in that no wall could be attacked without being seen by someone posted on another wall.

So, where did the lavish villa that hosted the Kimye bash come from? That was Duke Ferdinando’s residence when the city was under seige. Secret passages lead all the way from the Palazzo Vecchio to the fort, in case the Duke found himself in imminent danger. Today, the fort serves as a venue for contemporary art exhibits and is even home to a spooky story or two. 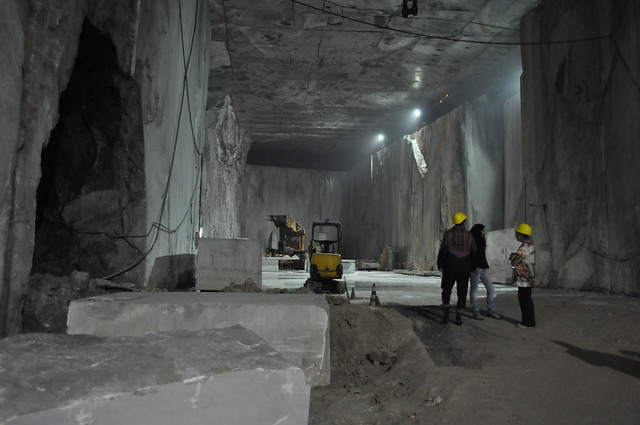 In the city that hails some of the most important marble statues (we’re looking at you, David), featuring Carrara marble at the wedding actually seemed quite apropos. The great quarries at Carrara, a few hours northwest of Florence, have produced enviable blocks of the highly desired material since the Roman Empire. It’s only natural, therefore, that Kimye would want to take their own (sizable) slice. After one marble piano, dozens of custom nude marbles, and a 70-foot marble table in which guests names were engraved at their seats, the cultural nod devolved into a garish display. I can’t blame guests for being too distracted by their names chiseled in stone to ponder the slab’s representation of Florentine culture.

However, if guests could look past the marble mess around them, they would have discovered that their 70-foot Carrara dinner table was in good company, even outside of Florence. The Pantheon in Rome, the Marble Arch of London, and the Harvard Medical School are all constructed or embellished with Carrara marble. The marble quarries of Carrara were also Michelangelo’s favorite, and we have a feeling he knew what he was talking about.

Interestingly, this famous area has produced much more than stone throughout its history. During 19th century, its quarry workers were some of the most ill-treated in Italy, making few want to take a job there. Out of desperation for laborers, the quarry was filled with ex-cons and fugitives. As a result, the quarry became a pressure cooker of radical ideas, mob mentality, violence, and testosterone – the perfect recipe to create some of Italy’s most dangerous anarchist groups.

Anarchist marble! We hope it gets a mention on the next Kanye album.

While most of the Kimye affair was difficult to swallow, dinner certainly was not. Giorgio Pinchiorri, the owner of renowned Enoteca Pinchiorri, designed a custom menu for the event which took adventurous modern twists on Florentine classics. Catering company Galateo Ricevimento executed the dishes and constructed the seven-tier cake featured that evening.

Not to brag, but the Tuscan Wedding Meg and I managed to crash last September was catered by the same company. (Ok, I’m totally bragging.)

Kim and Kanye wanted only the best desserts featured at the wedding, and in Florence, the best is Vivoli. Arguably one of the most famous gelaterie in Italy, Vivoli has been churning out the good stuff since 1930.  Local markets provide fresh produce and spices with which chef Piero Vivoli concocts his vast flavor variety.

Vivoli is tucked on a winding road in the Santa Croce neighborhood, not far from Via Ghibellina, at the intersection of Via Vigna Vecchia and Via Isola delle Stinche. Open until 11 p.m. and often later in the summer, there is no reason why you can’t get your hands on the dessert that was good enough for Yeezus.

Kim and Kanye also managed to book perhaps the most beautiful pair of pipes in all of Italy, Andrea Bocelli. Selling over 100 million albums and breaking records on both the pop and classical charts, Bocelli has achieved legendary status not only the Italian music scene, but also in Italian culture. We’re still trying to figure out why such a class act agreed to serenade these two. Oh, what’s that? The paycheck featured at least 6 figures? Bravo, Bocelli. 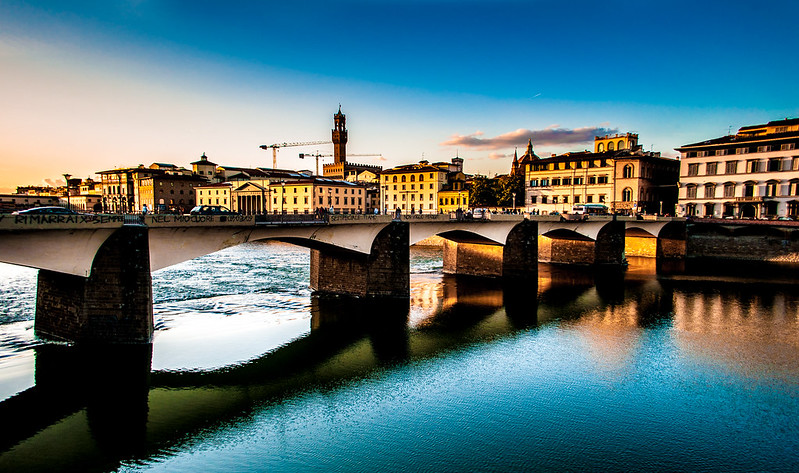 Before the evening came to a close, guests looked down on Florence from their panoramic view of the city to watch the firework display, which launched from the Ponte alle Grazie. The bridge, just east of the Ponte Vecchio, was originally constructed in the 13th century. Small structures, much like we see on the Ponte Vecchio, were built atop the bridge. The Santa Caterina Benedictine Nuns lived here, cloistered on the bridge until they moved onto the main land, behind the walls of Le Murate. In 1876 these structures on the bridge were removed to make rail tracks. By 1944, the 700-year-old bridge finally came crumbling down as German forces destroyed the bridge as they retreated from Florence at the close of WWII. The structure we see today was rebuilt a decade later. It wasn’t until May 24th, 2014, however that the bridge would serve its greatest purpose as the launchpad for Kim and Kanye’s wedding fireworks.

After the fireworks died down, the light system (that Kanye reportedly made Italians replace 20 minutes before the wedding) was turned off, the bar (that Kanye also threw a fit about) shut down, and the massive gold box housing the toilets was closed. All we were left with was Kim, Kanye and a love story sure to last a summer (maybe).

The happy couple posing in the photo booth post vows

And, as promised, we were left with this picture of Jayden Smith in his white batman suit, posing with Girls Gone Wild’s own Joe Francis. So that’s pretty special.

Although Florence for Free may not be able to get your name carved into a 70-foot marble table or present you with a giant bottle of Chianti dipped in gold and sealed with diamond-encrusted cork (thank you Jay-Z and Beyonce for setting that bar), we can attempt to bring you the history and the culture that everyone else seemed to miss. Except for Khloe, I really feel like Khloe gets it.