frightening florence: the monster of florence

In Halloweens past, Meg and I have properly haunted this blog with spooky stories and lurid legends that lurk in the palazzi and piazze of Florence. That’s all they are though – stories, legends, claims and hearsay. Far more chilling to Florentines is an individual who has haunted the hills of Florence for decades and a case that has yet to be closed. They call him il Mostro di Firenze, and his unspeakable string of murders and mutilations have shaken Florentines more than any tall tale or spooky sighting.

This week, instead of heading to the streets to see the sites, we are keeping you safely at home while we have a little scary story time (my favorite time) and go full Dateline on the Monster of Florence.

Warning: This post departs from our usual light tone and covers sensitive material. If you  happen to use FFF as your child’s bedtime story, please skip this one. Finally, the source for this post is an account published in The Atlantic by Douglas Preston, co-author of The Monster of Florence, whose curiosities led him so deep into the case of the Monster that he himself became a suspect.

Florence, Italy and the surrounding countryside is a romantic Tuscan cliche. It’s Brunelleschi’s dome and Botticelli’s Venus. It’s rolling hills and misty olive groves at dawn. To the starry-eyed tourist, or the local Florentine, this place is Heaven. The very hills that romantics have chosen for centuries as the backdrop to their love stories, the Monster of Florence chose as the set for 14 brutal murders between 1974 and 1985. In a city that has inspired feats of science, art, beauty and legendary love stories, how could this happen? 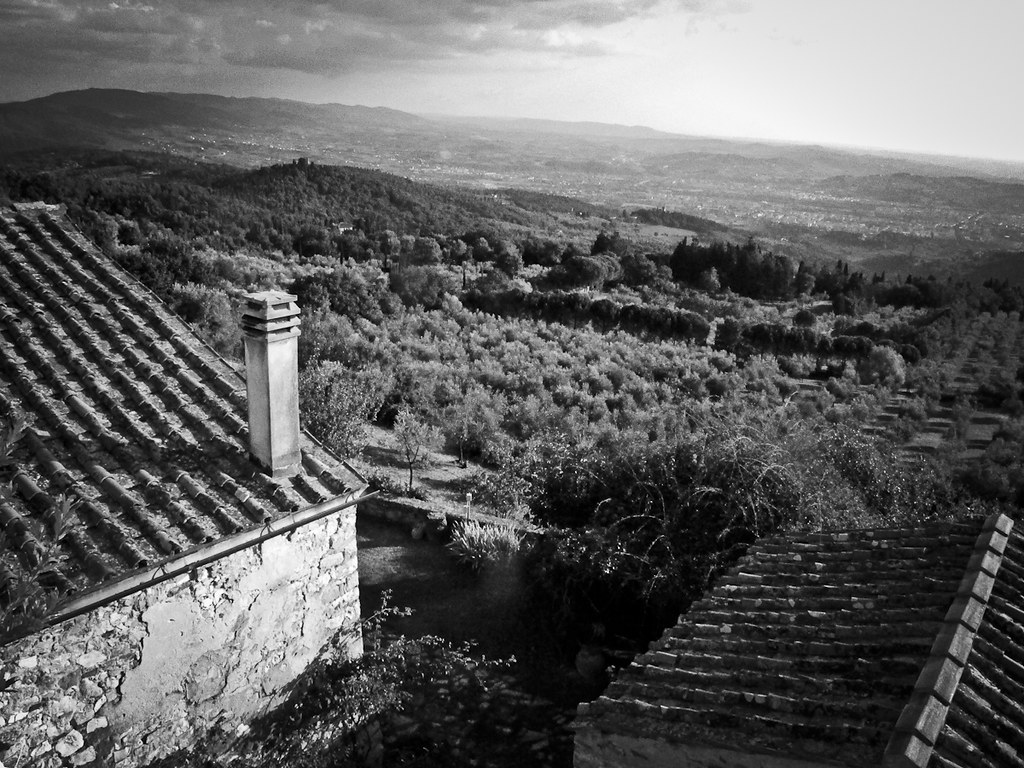 On June 8, 1981, a man out for a morning walk near his country home came across a parked car in a field. The morning light shone upon a young man in the front seat who appeared to be sleeping. Upon a closer look, the passerby found that the front window had been broken and the sleeping man had a bullet hole in his forehead. Behind the car, a woman lay dead and her female parts mutilated. The couple was identified as the engaged Giovanni Foggi and Camilla di Nuccio.

Like many young Florentine couples, Giovanni and Camilla took to the hills in search of a moment of privacy–a hard commodity to come by as most Florentines live with their families until they are married. The practice of “parking” in the countryside was such a part of the youthful culture of Florence that a “cottage culture” developed around it–voyeurs (or as it’s known in America, Peeping Toms).

So nobody was surprised when police arrested a voyeur, Enzo Spalletti, for the double homicide. He knew the hills well and was said to have been lurking near this particular road on the evening of June 7. With Spalletti behind bars, Florentines could breathe easy once again.

Mario Spezi, journalist for La Nazione, was not so relieved. Spezi’s curiosity would launch him into the case that would consume both his professional and personal life for the next 30 years. In Spezi’s frequent articles about the case, he named the murderer il Mostro di Firenze. Spezi’s updates excited all of Italy, drawing them into the case and sending them running for newspaper stands to read about newly surfaced clues and suspects. One clue in particular caught Spezi’s attention–an anonymous tip to reexamine a murder from 1974. The murder was similar in that a young man and woman were killed in their car just outside of Florence. The sticking point was the murder weapon, a .22-caliber Beretta with a flaw in the barrel that left an unmistakeable fingerprint on the bullet. It was a match.

On October 23, 1981, with the original suspect, Enzo Spalletti, locked behind bars, the monster struck again. Another young couple parked in the hills. The man’s body remained in the car, and the woman’s was found behind with the exact mutilations.

Florence had lost six young people to the monster in one year. With each murder a new suspect imprisoned, only to be exonerated with the next killing. Just as investigators began to lose hope, another anonymous tip arrived. This time, a newspaper clipping reporting on a 1968 double homicide of a couple killed in their car. The note told investigators to take a closer look. The only problem? The case had been closed for 14 years. Stefano Mele had killed his wife and her lover in a jealous rage. Not only was there a motive, there was a confession. Moreover, Mele was living in a halfway house on the other side of Italy. He was not the monster. Nonetheless, the police began to dig. Immediately, the connection became clear. The murder weapon, once again, was a match.

Spezi could not wait for answers. He left Florence and headed to Verona to speak to Stefano Mele himself. Spezi was discouraged to meet a weak, confused and mumbling man. It didn’t appear that Mele would be much help. Just as Spezi gathered his things to leave, Mele’s stammering stopped, and he said,

From these words Spezi came to a conclusion that would change the course of the investigation. The 1968 murder was not committed by one man, but rather, it was a clan killing. The case led to the investigation of three brothers from Sardinia– Francesco, Salvatore and Giovanni Vinci. All three had been connected romantically to Mele’s wife. Spezi believed they were involved in the killing, and at least one was with Mele that night.

The investigation led to the arrest of Francesco Vinci and once again, Florentines were overcome with relief. This time around, there was even more evidence to add up. The monster was surely behind bars.

However, history continued to repeat itself. The monster struck again in September of 1983.

Less than one year later, in the height of the Florentine summer of 1984, there was another couple dead. The case was identical, but this time, the Monster added to his mutilations by removing the left breast of the female victim.

On September 7, 1985, the monster committed the most gruesome and last of his murders.

With 14 homicides, the entire country followed the case with bated breath. And, with a high profile case came high profile investigators, lawyers and prosecutors. Some enjoyed the benefits of new-found fame the Monster provided them. The case felt like a horror movie and everyone was striving to be the hero that would save the day.

In January of 1993, after investigating over 100,000 individuals, the hunt ended when Pietro Paccini was charged as the Monster of Florence. He fit the bill ….enough. He lived in the country, he had a history of rape and violence towards women and most notably, he had Botticelli’s Primavera prominently displayed in his living room. Investigators fixated on the flowers growing from the mouth of goddess Chloris, matching them to the position the monster left the necklace of one of his victims, coming from of her mouth. Despite Paccini’s apparent physical shortcomings, police decided that the evidence was good enough. They had put away the Monster, and for good this time.

Spezi, who had spent his career steeped in and tormented by the Monster of Florence, was convinced otherwise and infuriated by the baseless conclusions the investigators had drawn. While the public case was closed, Spezi and a small group from the Carabinieri continued to research the case privately. In the year 2000, American author Douglas Preston moved his family to Italy in search of that classic Tuscan dream. When Preston discovered that the 1982 murder had taken place across the street from his new home, his interest was piqued. Preston befriended Spezi, and together the two began to more intensely investigate the case that had now been closed for 7 years.

A lead from Spezi’s friends in the Carabinieri tipped him off to a new suspect. He was the son of one of the three suspected Sardinian brothers (whose identity Preston kept private). He had a violent past, access to the murder weapon, and lived in northern Italy during the exact five year lapse of murders. Despite the pleas of their wives, Preston and Spezi went to the home of the man, just outside the city center of Florence. They arrived at his door with a plan, false identities and an excuse for an interview. The cover fell instantly when the man greeted Spezi like an old friend, like he had been waiting for the day the Monstrologer, as Italy had fondly named Spezi, would show up at his door. The interview was as frank as the greeting. Direct questions asked and direct answers given. The man was smug and his answer to Spezi’s question, “Are you the Monster of Florence?” was perhaps the most smug of all. Too profane to include in our PG blog, you’ll have to head to Preston’s article for the answer. Nonetheless, when Preston and Spezi left the man’s house, they knew they had found the Monster, but there was nothing they could do about it. Until…

Spezi’s friends at the Carabinieri notified him of a clue that may just close the case forever. A friend of the source had been visiting a villa just outside of Florence a few months prior. There he came across a run-down building on the grounds that was frequented by a group Sardinian men in Florence. Here, he had seen Preston and Spezi’s suspect. Not only did he see him, he saw him in a room with six locked metal boxes and a .22 Beretta. Six female victims in total seemed to perfectly fit with the six boxes, plus the murder weapon.

Once again, Spezi and Preston could not contain their excitement and immediately headed to the villa to see what they might be able to find. The villa was closed and rain poured down. The trip turned out to not only be useless but a terrible misstep. Investigators had their eyes on Spezi and Preston, suspicious that such intimate knowledge of the case pointed to involvement. Spezi’s phone lines had been tapped, and a misread conversation between Spezi and Preston earlier in the day, discussing their visit to the villa, was exactly what the police needed. Spezi was arrested and Preston called in for questioning. Spezi was sentenced to six days in isolation followed by intense questioning and excessive time in courtrooms. Eventually, Spezi was released, but he remains a person of interest in the case. Preston, on the other hand ,was released, returned to America with his family and will never be able to return to Italy.

Spezi officially ended his search for the Monster, and he was forced to forget the clues that might have closed the case.

If you’ve made it this far, you may be wondering, “but what about the killer?” You wonder with the rest of the world. To this day, the Monster of Florence remains an open case.

While we are always looking for a good spook, the Monster of Florence was and is a very serious case that affected not only the victims and their families deeply, but the dozens prosecuted, falsely accused, and those unknowingly pulled into the nightmare that the Monster created.

The moral of the story is this: if your Italian beau wants to take you on a romantic picnic in the hills, perhaps tell him you’d enjoy dinner in the city instead.