If you know just one bridge in Florence, know the Ponte Vecchio. If you know two bridges in Florence, make the second the Ponte Santa Trinita. The bridge of Santa Trinita lies in the shadow of the iconic Ponte Vecchio, just one bridge to its west, and is most often utilized as the perfect post-up for a view of the more popular ponte. The bridge that supports us as we pose for this year’s holiday card and connects us on our commute from shopping on Via Tornabuoni to lunch in Piazza Santo Spirito, allows us to come and go without much of a thought given to what carries us across the Arno. It keeps to itself and and in doing so remains, what I believe, is the Arno’s best kept secret. 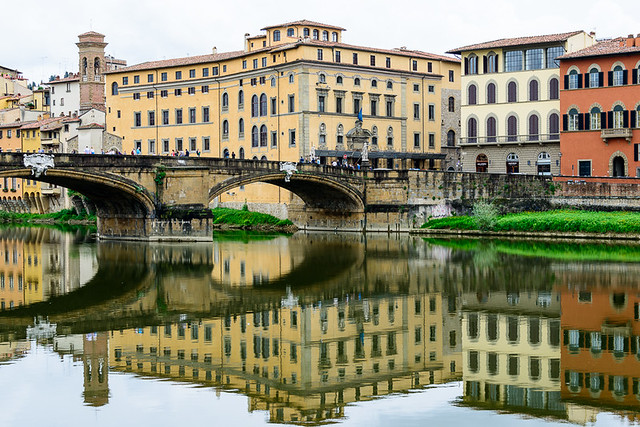 Although the Ponte Santa Trinita may not have the wow factor of the Ponte Vecchio, it’s graceful architecture and decorative details make this bridge a stunner in its own right. The ponte is recognizable by three elegant arches and protruding pylons (a tempting/dangerous spot to enjoy the sunrise with a few fearless friends). Twisting, turning, shivering, and welcoming Mannerist statues that represent the four seasons greet pedestrians on each end. And what’s happening with those grimacing goats at the cusp of each arch? Read on ponte people…

The original Ponte Santa Trinita, built in 1252, was a humble wooden structure connecting the north and south sides of the city. It adopted the name Santa Trinita from the nearby basilica at the north end of the bridge. Only seven years after its construction, the volatile Arno swept away the wooden bridge. Santa Trinita 2.0 was constructed with stone to withstand the fickle fury of the Arno. The stone bridge had a longer shelf life than the original wooden bridge, lasting until 1333, when the Arno reared its ugly head yet again. Renaissance architect Taddeo Gaddi was employed to build the third version of the ponte.

What Florentines had hoped would be the final masterpiece was yet again destroyed in the flood of 1557. The middle of the 16th century, however, was the grand era of the Medici dukes, and the family was more determined than ever to take every opportunity to leave their mark on the city. Duke Cosimo saw the destruction of the bridge as an opportunity to build a structure more impressive than ever before. The bridge would celebrate Cosimo and the Florentine victory over its rival, Siena. Cue the Capricorns–Cosimo’s zodiac. 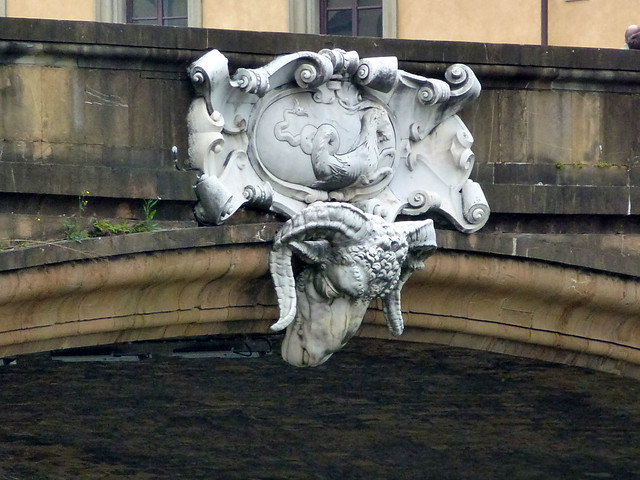 Michelangelo and Vasari were among the heavy hitting names whose hands can be found in the design of the bridge. Ultimately, the responsibility of rebuilding fell on architect Bartolomeo Ammannati. The design addressed the enemy waters of the Arno by incorporating protruding pylons from either side of each support of the bridge. The pylons direct raging waters away from the supports, giving the ponte the features it needed to finally stand up against the Arno. 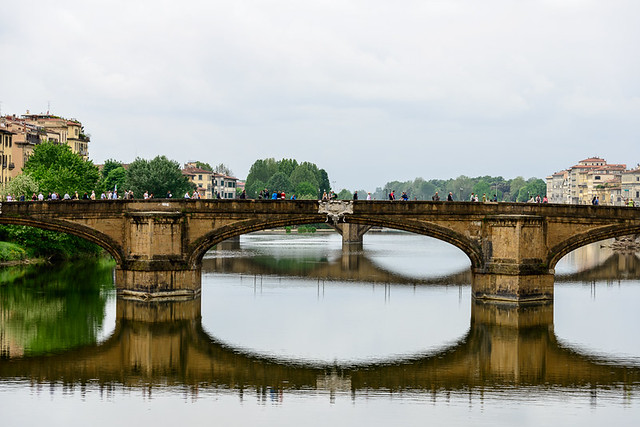 In 1608, the bridge was embellished by four statues representing the seasons. Summer and Autumn, by Giovanni Caccini, Winter by Taddeo Landini, and the most famous, Spring by Pietro Francavilla. We would tell you who’s who, but we think you’ve got this. The statues were commissioned as part of the celebrations surrounding the marriage of Duke Cosimo II to the Archduchess of Austria. 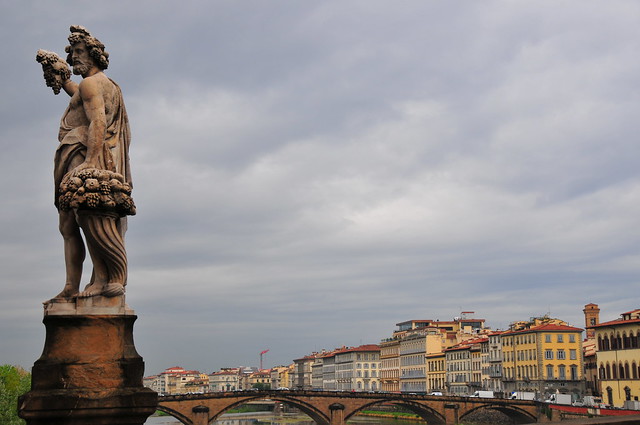 For nearly four centuries, the bridge stood tall, carrying millions across the Arno as they explored Florence. Although outshone by the Ponte Vecchio, the bridge was celebrated for its gracefulness, beauty and impressive architecture.

Seemingly doomed, the bridge once again came down in 1944, but this time by the hands of men.

British engineers dynamited what was left of the Santa Trinita bridge before replacing it with a Bailey bridge, BBC News Magazine

World War II had taken Europe, and somehow Florence had remained relatively unscathed. Described by Hitler himself as “the crown jewel of Europe” and as a city under fellow Axis power, Florence hoped that its precious treasures may remain intact. Unfortunately, when the Allied forces moved north towards Florence, Germans hastily retreated. In attempts to slow the enemy, Germans had every bridge in Florence, with the exception of the Ponte Vecchio, destroyed.

The Ammannati bridge that was supposed to last an eternity came crumbling down in a matter of minutes. After the German retreat, the British military had the remains of the bridge leveled and constructed a simple wooden Bailey Bridge. It transported Florentines between north and south Florence for 14 years.

American art historian Bernard Berenson was actively involved in fundraising for the reconstruction of the historic bridge. By 1955, foreigners, Florentines, and the Italian government had come together to raise funds to begin the arduous chore of attempting to replicate the Ponte Santa Trinita with as much of the original materials as could be salvaged. The Arno was damned, and every last stone that could be recovered from the original bridge was gathered.

Meanwhile, appointed architect Riccardo Gizdulich fervently studied original designs by Ammanati and chiseling techniques of the 16th-century masons who shaped the stones of the bridge. Gizdulich insisted upon his artisans using the same tools that Ammannati would have had his men use 400 years prior. To replace the stone that had been swept off by the Arno, Gizdulich even tapped the same quarry that Ammannati used in the Boboli Gardens. As for the statues of the four seasons, they were found in the rubble at the base of the bridge. All that is, but the head of Spring. The bridge was dedicated in 1958, despite poor Spring’s lack of a head.

Italians, familiar with tracking down their precious works of art, were on a mission to solve the mystery of the missing head. During this time, legends were spun about her whereabouts. Some believed a German soldier had stolen her and that the head gave him the power to become invisible. Stories like these would later inspire movies such as the Miracle at Santa Anna. Despite the intrigue, the head was discovered in 1961 by a diver, deep in the silt of the Arno. With the re-heading of Spring, the Ponte Santa Trinita was restored to its “original” Medician glory. 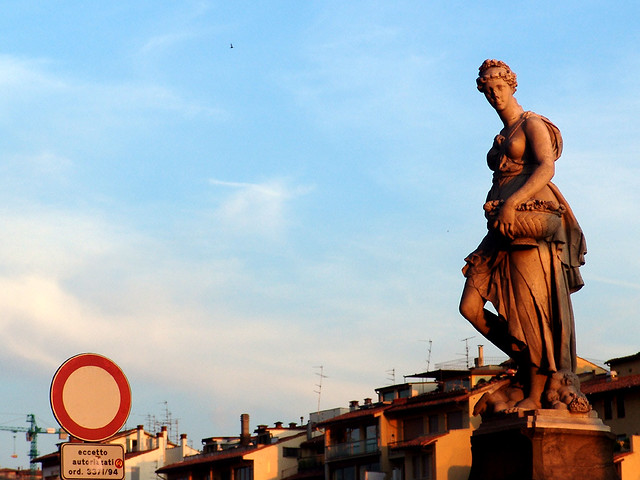