the medici chapel, for free!

Anna Maria Luisa de’ Medici is our girl. If she were alive today, we would make this FFF duo a trio. She loves art, she loves Florence and, each February 18th, she makes it all free. As the last member of the Medici family, Anna Maria ensured before her death that the art collected, commissioned and inspired by her family would never leave Florence. Basically, we have Anna Maria to thank for 75% of what we love about Florence (you know, rough guesstimate). Today, the city honors her legacy with one free museum day a year, every February 18th. Celebrations will begin with a procession in Anna Maria’s honor at 11 a.m. and culminate at the Basilica of San Lorenzo, the burial place of the final Medici princess.

Since we’re already at San Lorenzo, why not stay to explore the Medici Chapels–for free!

The Medici Chapels pop up on all the Florence must-see lists, but you might not be sure why. Please allow these two art history nerds to explain, in a nutshell, why we think that free trip to the Medici Chapel is a must this Wednesday. If our lighthearted overview leaves you wanting more, click here, here and here for more on this complex masterpiece. 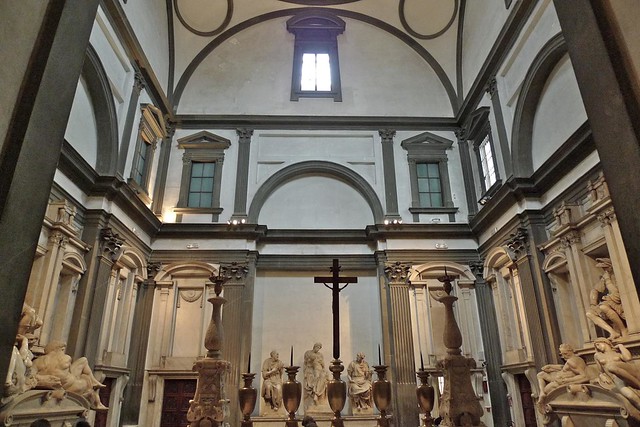 The entrance to the Medici Chapels is on the west (back) end of San Lorenzo. Once through security, you will find yourself in the crypt. Here are where the lesser known Medici lie. Instead of Michelangelo-designed tombs, these “second classers” are now hidden behind postcard racks and information booths.  But don’t miss the large bronze likeness of Anna Maria in the center of the crypt, reminding us that everything we see on our trips to Florence could have vanished if it weren’t for her. Grazie, girl.

Follow the signs and the tourists out of the crypt and up a stone staircase that will take you to the grand Chapel of the Princes.

The Chapel of the Princes is, well, a bit much. It is unique in that it is one of the rare examples of the Baroque style we see more often in Rome. The chapel was constructed in the 17th century and designed, in part, by Don Giovanni de’ Medici. It is a bedazzled ode to the late Medici princes. I could get into the precious stones used as wallpaper, but with Michelangelo waiting for us just down the hall, I would recommend waving a quick hello to your favorite Medici duke and heading out.

A short hallway later, you will find yourself in the calm, serene, gray-scaled masterpiece of a chapel that is one of Michelangelo’s seminal works of art.

Before I start the Michelangelo party, let me back up. The Basilica of San Lorenzo was historically the Medici family church, where all of the most important members of the family were buried. The Old Sacristy, just off of the main basilica and designed by Brunelleschi, quickly filled up with 15th-century Medici, such as Cosimo the Elder. A few Popes and Dukes later, it was clear that Medici were Florence’s greatest family, so they deserved the grandest tombs. In 1520, Cardinal Giulio de’ Medici (future Pope Clement VII) decided to commission Michelangelo to make a final resting place worthy of worldly (and other-worldly) kings.

Michelangelo’s work on the chapel was to be completed in stages, as he split time between Florence and Rome, in the 1520’s. Michelangelo’s designs mimicked the serene gray-scale and symmetric lines of the Old Sacristy in the main basilica, and the grand coffered ceiling alluded to the dome of the Pantheon.

Let’s begin our tour of the chapel by meeting the Medici men buried here.

Lorenzo and Giuliano de’ Medici: To your immediate right, you will find a statue of the Virgin and Child flanked by saints Cosmas and Damian. Here lie two of the most famous Medici. Lorenzo, often referred to as Lorenzo the Magnificent, ushered in many of the great Renaissance artists (including big Mike himself). Lorenzo’s brother, Giuliano, is unfortunately most widely known for his assassination during the Pazzi Conspiracy. For being some of the most well-known Medici, their tomb is surprisingly understated

Giuliano de’ Medici: Wait, what? Yes, the Medici weren’t too creative with first names. Turn toward your left, and here lies a different Giuliano, the son of Lorenzo the Magnificent and ruler of Florence upon the family’s return from exile in 1512. His likeness is greatly idealized (sorry Giuliano, but everyone knows you weren’t that good-looking). The ruler is beautifully sculpted with an open posture, kind eyes and dressed in traditional Roman garb. 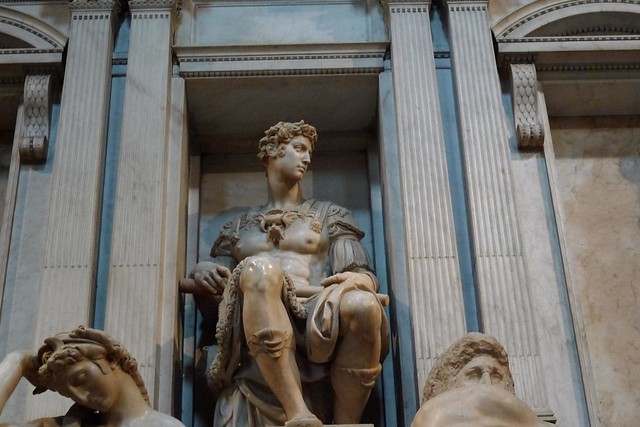 Tomb of Giuliano de’ Medici, by Darren and Brad

Lorenzo de’ Medici: Again with the names! Do a 180 to meet Lorenzo, commonly referred to as the Duke of Urbino. He is Lorenzo the Magnificent’s grandson, and he ruled Florence from 1516-1519. This statue of Lorenzo is described by many as il pensieros0, or the thoughtful one. Many academics argue that Lorenzo, in contrast to extroverted Giuliano, is sculpted to be more reserved and thoughtful. (I, however, like to think of this as a “bro” pose. The cocky duke seems to have just popped out from under his ball cap–er, lion-mouth helmet–to check out a signorina strutting by. Just don’t put that on your art history exam!) 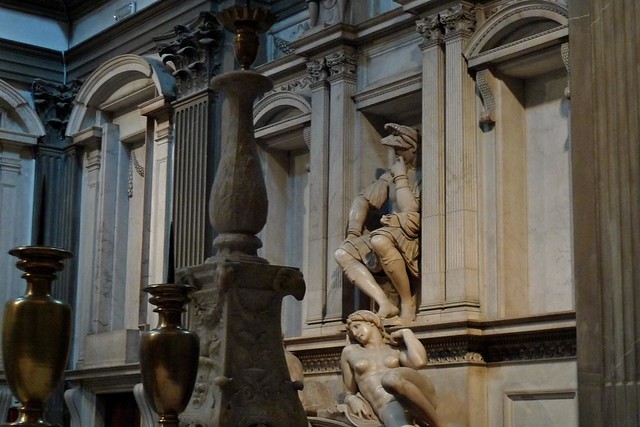 Tomb of Lorenzo de’ Medici, by Darren and Brad

Now that we have met the men, can get to the true stars of the show? Move over Medici, we’re keying in on Michelangelo’s personifications of Dawn, Dusk, Night and Day.

Night and Day recline below the statue of Giuliano. Night, resting on the left of the sarcophagus, is identifiable by her handful of poppies (known to knock you out!) and an owl under her knee–not to mention she is seriously nodding off. Confused by Night’s anatomy? We all are. Michelangelo wasn’t too into the female form. Therefore, his statues of women tended to look more like men wearing a coconut bra. Day, on the right side of the sarcophagus, is very much awake. His body twists towards what’s coming. In fact, all this twisting set a precedent subsequent artists would attempt to mimic for centuries. I will even bet you a gelato that you’ll see at least one artist sketching the sculptures on your visit today.

At the base of Lorenzo’s tomb, the reclining figures represent dawn and dusk.  Dawn reclines to the right of Lorenzo and looks relatively similar to me when I get out of bed in the morning–she is not feeling it. Dusk, to Lorenzo’s left, looks like he’s just about done with whatever the day handed him. Interestingly enough, the face of the aging Michelangelo (who was also might have been feeling “over it”) can be seen in the face of Dusk.

While I may make light of these personifications of the day parts, they are actually quite beautiful and tragic metaphors for life, death, and grief. Priceless sketchings, a fascinating peek into Michelangelo’s mind, were found on the wall behind the altar here in the 1970s. Today, a thin layer of glass allows them to remain exposed, so you can see how the statues went from imagination to marble.

Michelangelo did not live to see the final fruits of his labor, so his work was carried out by his faithful followers, Giorgio Vasari and Bartolomeo Ammannati.

A visit to the Medici Chapels is worth the 6-euro entrance fee–actually it’s worth a lot more. But this February 18th, it’s all yours for free. If you can, we recommend setting your alarm early so you can arrive when the doors open. Cut the crowds and don’t get distracted by the shiny Chapel of the Princes (you can always work backwards). Bolt for the Medici Chapel and see if you can’t get a moment alone with Michelangelo–there’s nothing like it.

Oh, and don’t forget to pay your respects to Miss Anna Luisa Maria de’ Medici before you leave!