Sunsets and River Rats: An Ode to the Arno

Before I left Florence after grad school (sniffle sniffle), I wrote up my laundry list of lasts. My friends found item #3 a bit off-putting–touch the Arno. A lovely shade of brownish green and home to growing families of river rats, they weren’t exactly drawn to its shores with the same enthusiasm. The thing was, I felt rude. I felt rude that I had crossed from bank to bank thousands of times, shot countless photographs of his waters at sunset, relentlessly studied the history of the city that was built on his banks, and yet never actually made contact with the lifeblood of the city I had come to call home. I just couldn’t leave without paying my respects.

In the two millennia of Florence’s history, the Arno has brought life, death, beauty and destruction to the city. So today, instead of walking you over his waters, as we so often do, we are taking you to them. (Don’t worry, you’re not required to get as cozy as I did with the roily river!)

The story of the Arno begins at its source–the Apennine Mountains. Tucked in the Casentino region of the mountains is a stream that, in only a few short kilometers, will become the Arno River. Over its course, the river takes a brief but scenic journey west, through Tuscany, to the Tyrrhenian Sea. While Arezzo, Empoli and Pisa can technically claim the Arno as well, we feel like Florence has true rights to the river (but, yes, we acknowledge our bias).

Map of the Arno via Wikimedia

In the 19th century archaeologists hit the Etruscan jackpot at a Lake near the source of the Arno, in the Casentino region of the Apennines. They drained the lake and discovered 600 Etruscan statues and idols (giving the lake its modern name – The Lake of the Idols). Multiple theories have been floated as to how the idols ended up at the bottom of the lake. As the lake is situated on a geologically unstable part of the mountain, one theory suggests that Etruscans offered sacrifices to the god of the mountain (see 16th-century depiction of the god below) in the lake, hoping to appease the god and prevent a great flooding of the Arno. Later on, it would have behooved Florence to continue the sacrifices, as the Arno’s fury has brought a few devastating floods to the city over the centuries (but we’ll get to that later). 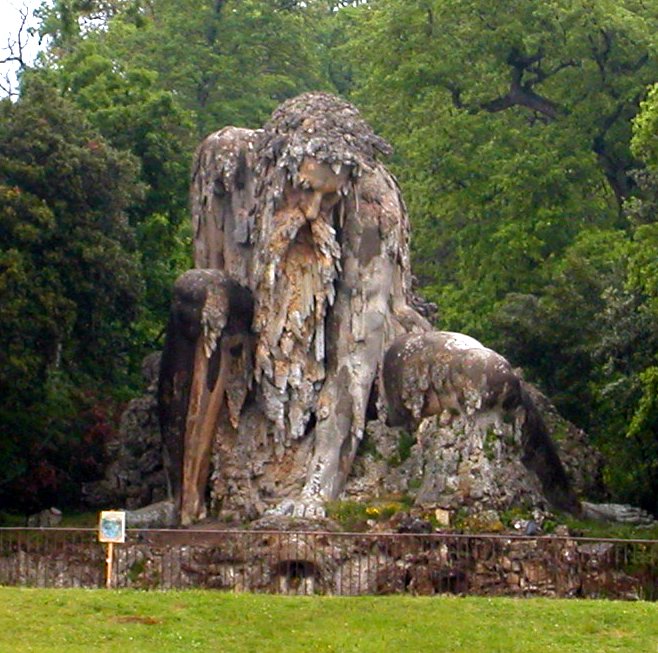 //embedr.flickr.com/assets/client-code.jsEven the city’s founding was dependent upon the Arno’s presence. In 59 BCE, when Julius Caesar founded Florentia, he chose to place his military camp at the easiest point to cross the river. Eventually the military camp grew into a town, and the town became an important pit stop on the trade route to the sea. The river pumped money into the growing city while it took artisan goods in and out. Florence developed according to the tide of the river. The leather-making neighborhood of Santa Croce, for example, was established there thanks to its easy access to the river. Over the next several centuries, the Arno not only brought trade and clean(ish) water to the city, but it also hosted Duke Cosimo de’ Medici’s morning swims and inspired bridges designed by Michelangelo himself. Today, it’s often used by crew teams to practice and perfect their strokes.

Central to the city, physically and emotionally, it was only a matter of time before the Arno began to be personified in art. Odds are you’ve seen Arno lounging around Florence (or anywhere in Italy for that matter). He always appears relaxed, like you’d expect him to be sunbathing on his donut floaty and waiting for his next pina colada. And yet, this particularly “lounge-y” personification of the Arno always struck me as odd. It never seemed to capture the river’s true wrath.

Over the past thousand years, the Arno has unleashed its fury on Florence, devastating the city, with about one flood per century. The most notable, and recent, was the flood of 1966. In that year, heavy rains began falling in Tuscany in September. Soon, the Castentino (the Arno’s origin) was saturated. The rains increased in October, and on November 2nd alone, seventeen inches of rain fell in twenty-four hours in the region. The snow on the mountain melted, and slushy waters sped toward Florence. In the middle of the night, November 3rd, 1966, the Arno came rushing into Florence. Much of city center was submerged in water, and numerous lives were lost.   Today, there are haunting reminders of its invasion throughout the city. Those of us that can peel our eyes from the cobblestones and look up will spot plaques that indicate how high the waters reached in 1966. For images of the flood and its aftermath, click here or here. 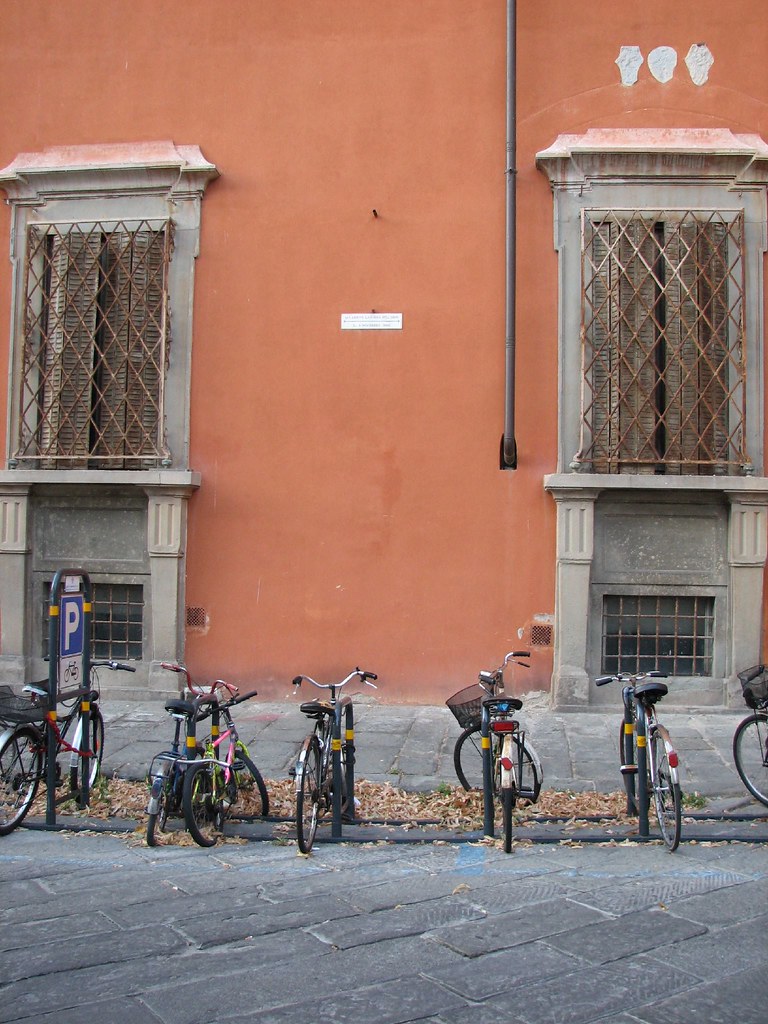 High water mark from the flood of 1966, by Kevin Armstrong

Another heartbreaking consequence of the flood was the loss of countless works of literature and art. Nearly one million precious books and documents were destroyed at the National Library. Panels from Ghiberti’s Gates of Paradise were knocked off the Baptistry doors, and Cimabue’s crucifix in Santa Croce found itself facedown in water for days. Many of these works have since been restored and even inspired new means of conservation work. However, a multitude of documents and works of art remain in the conservation queue, some 50 years later.

Piazza del Duomo during the 1966 flood

Therefore, it’s important to remember the power of the river so many of us skip over multiple times a day without a second thought. For better or for worse, the Arno shaped Florence, and, in turn, Florence has shaped us. We owe it our respect, and wonder about the secrets it holds. So, in honor of that brownish-green river that we like to stay comfortably above, this one’s for you! Cheers to your breathtaking sunsets, your stunning bridges and even your river rats. May you stay safely between your banks forevermore. 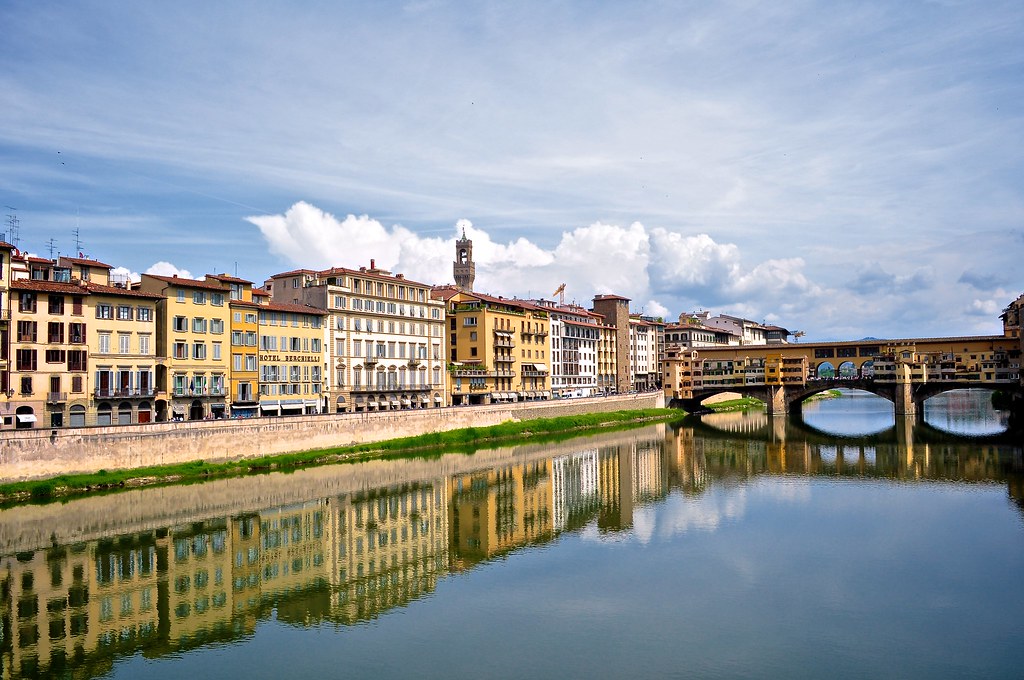 Reflections on the Arno, by Giampaolo Macorig