As we said before, we’re all about spreading the Team Florens love. Promoting and investing in culture to sustain the city’s economy? Yes, please. With this noble goal in mind, I’m going to tackle a topic that might at first seem at odds with our budget-friendly, for-free blog: high-end fashion.

We’re talking Gucci, Ferragamo, Prada and more. While much of the art produced by these design labels can only be purchased by a privileged few, the fashion industry is certainly a vital part of Florence’s culture and economy. But its influence and importance is not limited to inside stores: luxury window displays inject a beautifully modern, ever revolving burst of energy into the stone-laid city. Bright colors, clever uses of fabrics and unexpected supplies dazzle as vignettes framed by Florence’s heavy masonry. 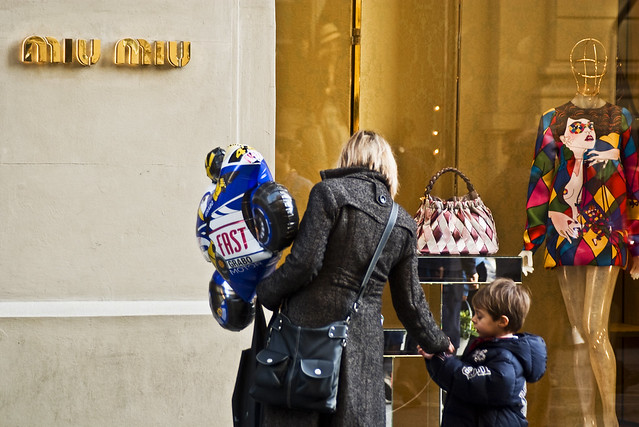 Before you dismiss this as a glorified window-shopping stroll, let me stress: crafting these displays requires mastery and artistry. And we’re not talking about simply one or two stores, but rather row after row of visual lightness and creativity.

The best part? You don’t need to have a black American Express burning a hole in your pocket to enjoy (and be inspired by!) the fun – it’s free for the taking! Browse each brand’s nuanced personality before settling on the sartorial style that would best complement your other life as a jet-setting fashionisto/a. Also, we recommend the walk at night, when each storefront is brilliantly lit like a jewelry box on display.

click for interactive map and to enter your starting location

Start walking down Via Roma from Piazza del Duomo. On your way into Piazza della Repubblica, have a look at Miu Miu’s windows brimming with whimsy. Then, head under the arch that marks your glorious entrance into the land of luxury.

As you approach Palazzo Strozzi, look for a number of shops (like Louis Vuitton) that up the visual ante before arriving at Via Tornabuoni. Here, whichever direction you turn, you’ll be delighted by the likes of Pucci, Cavalli, Prada, Versace and Zegna.

If you haven’t had your fill of eye candy yet, explore the triangular section of Via della Vigna Nuova, where Furla and Gianfranco Ferré have made their home amongst other celebrated lines.

Ferragamo built a Florentine workshop that produced handmade shoes and employed a great number of specialty artisans during its time. Today, the Salvatore Ferragamo Shoe Museum stands at the end of Via Tornabuoni and contains a wealth of models designed by the master himself. The influence of his genius on Florence – and the world – is easily understood from a visit to this stunning tribute. Admission costs 5 euro, but as all ticket proceeds are donated to a scholarship for promising young shoe designers, it makes it easier to splurge a bit.

Similarly, Guccio Gucci has left his mark on the city. A Gucci store is located on Via Tournabuoni, the brand has office space in the Oltrarno, and, newly opened in 2011, the Gucci Museum has officially brought Piazza della Signoria into the 21st century. Not bad for a Florentine artisan and merchant. Again, the museum has an admission fee of 6 euro, but 50% of every ticket sale is donated directly to Florence to help “preserve and restore the city’s signature art treasures.” Plus, they have sugar cubes in the shape of the iconic interlocked Gs at its chic cafe. Both are things we can toss a few euros behind.

So what can we learn from Florence’s most elite fashion houses? First, that their artistry is more approachable than most are led to believe, and it is flawlessly integrated into the city’s visual fabric. Second, their founders were both creators and patrons of art; through their legacy, they continue to support the city with their craft.  Investing in art is not considered a frivolity but a way to sustain a unique, and treasured, way of life.

If Gucci could do it with flair and international success, why should the city of Florence be any different?  Team Florens, take note.

And even we wanderers, with no more than a few bills in our pocket, can be awed and inspired by the brands’ visual prowess, cultural influence, and longevity.

Funny, we think the very same of our favorite city.